~~Mr. Garrett has over 35 years of management experience. While attending Freed-Hardeman University, he worked in the restaurant industry which caused him to return home to Memphis and later attending Memphis State. By the time he was 21, had become the District Manager/Training of a multi-unit restaurant chain. Mr. Garrett later became a partner in Jackson and Associates Realtors, later leaving after several years of success. Mr. Garrett also volunteered as a reserve police officer reaching the rank of Lieutenant. In 1997, Mr. Garrett, co-founded, County-Wide Security, Inc. and served as its CEO. The company reached $2.2 million in annual sales and had 250 employees in 2004. The success of County-Wide Security, Inc. did not go unnoticed and was sold in 2004. In 2007, Mr. Garrett returned to security, co-founding GT Security, Inc.

Member of Church of Christ 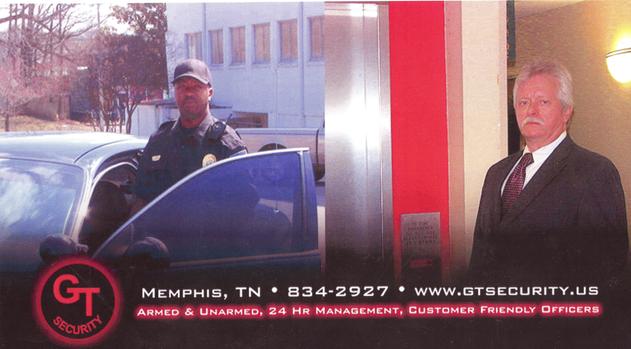 GT Security, Inc. is locally owned and managed by Paul Garrett and Chris Trim, CFE. We pride ourselves on our extreme professionalism and commitment to “SERVICE”. We never forget the seriousness of our services and the trust given to us by our clients. Our primary services include armed and unarmed security officers, commercial and residential patrols, and investigative and security consulting. GT Security, Inc. was founded to provide the most professional security officers to public and private entities at a reasonable, economical rate. We will even share our profit margins, including guaranteeing pay rates to the officers working your locations (ASK ALLSECURITY GUARD COMPANIES IN MEMPHIS TO PROVIDE THEIR PROFIT MARGINS!!). All our armed security officers before joining our team must have passed a drug screen and remains subject to random test, had at least 5(+) years of working history with the military, law enforcement, security/loss prevention or a combination meeting the minimum 5(+) years requirement.

Mr. Trim has over 20 years of management experience. While attending the University of Memphis, he served in the United States Marine Corps Reserves. He became a Front Office Supervisor at Embassy Suites-Memphis, enrolled in Promus Hotels Manager Training Program, and was promoted to Director of Safety and Security. He was also Director of Security at both the Adams Mark-Memphis and Memphis Marriott. While at Memphis Marriott was promoted to Director of Guest Services and served as Chief Engineer assisting the Director of Engineering during a full property renovation. In 1997, Mr. Trim co-founded County-Wide Security, Inc., serving as its President. . The company reached $2.2 million in annual sales and had 250 employees in 2004. The success of County-Wide Security, Inc. did not go unnoticed and was sold in 2004. Mr. Trim having volunteered as a reserve police officer since 1998, was given the opportunity to attend the Shelby County Sherriff’s Department Training Academy, graduating as the Class President. Mr. Trim while working full time as a police officer achieved the rank of Investigator in two different police departments. In 2007, he co-founded GT Security, Inc.

Mr. Trim volunteers as a Hospital Driver for Alcymia Shrine, transporting children to Shriner’s Hospitals and serves as a Warrant Officer in the TN State Guard.